SSAFCON is a unique monitoring system for portable line sampling of aviation turbine fuel, to determine particulate contamination and colour ratings. The system was originally developed in collaboration with a leading aviation fuel producer and is now used by companies responsible for distributing and uploading aviation fuel on a worldwide basis.

SSAFCON assists the routine filtration performance tests such as ASTM D2276-IP 216, which are carried out at fuel terminals and throughout airport distribution systems. The system provides a self contained and safer alternative to traditional hose end sampling, eliminating trailing hoses and exposure to fuel in the airport service area.

A bypass valve directs fuel through a filter cell containing the removable membrane filter or allows flushing of the sampler. Tested fuel may be routed to a flow line leading to a dump tank, without the need for buckets or containers.

SSAFCON mounting trays (16165-2) are permanently installed at the sampling points downstream of the filtration system, typically at a designated static test site, hydrant dispenser or onboard the refueling vehicle. SSAFCON sampler (16160-2) connects to the mounting tray by self-sealing quick release couplings and an earthing clip, docking/undocking of the Sampler is rapid and safe.

An integral volume meter and pressure valve are used to control flow rate and monitor the volume of fuel passed through the filter. After sampling, the Sampler is quickly and safely disconnected from the Tray and the filter removed for gravimetric or colorimetric analysis. 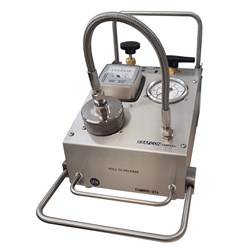