Sensors in modern automotive fuel systems often use silver or silver alloys, which are susceptible to corrosion from sulfur and other hetero compounds present in gasoline. In the past decade, refiners have shifted to producing lower-sulfur gasoline, but the process requires more severe hydro-treating that destroys naturally occurring compounds that give some protection against sulfur-based corrosion. Ensuring that fuel stays within acceptable corrosion limits requires constant and accurate testing. Unfortunately, modern silver strip corrosion test methods rely heavily on user’s individual assessment which are biased, as the operator must evaluate corrosiveness by interpreting the color and tarnish level of a silver specimen after it has been bathed in a fuel sample. Corrosion to silver has become a critical indicator of mainly sulfur compounds present in crude oils that persist even after refining processes. Measuring corrosiveness to silver continues to be a challenge, as no accurate standardized test has been developed to date. As mentioned before, current corrosivity tests involve manual and visual evaluation and rating, resulting in human error and bias. The petroleum industry calls for a high-level, high-tech standard for copper corrosion detection.

AgDDI corrosion testing equipment, from VISAYA Inc, uses a four-step automated vision algorithm and classification process to eliminate user bias. After evaluating the silver strip for corrosivity, the algorithm assigns the sample an integer between 0and 4, with 0 being no corrosion at all and 4 showing significant blackening. AgDDI provides standardization to the current visual silver strip corrosion test as referred in ASTM D7671 and gasoline fuel specification ASTM D4814. 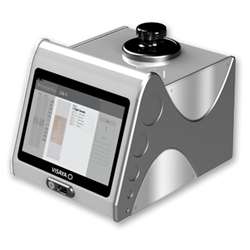